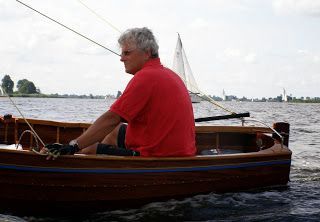 2015 was the year in which we are starting the second century of the 12 " dinghy in the Netherlands.
In 2014 we celebrated the 100 year anniversary held at the " Loosdrechtse Plassen". Over 174 12"
dinghy's where present from all over the world in their classic traditional wooden boats. New and
old. Five new dinghy’s where traditional baptized and where presented to the dinghy world. It is the
oldest one design class in the Netherlands and against the odds the fastest growing wooden class. It
was an event for once in a lifetime. No better evidence off the strength of the Dutch way of sailing a
12" dinghy.
January 2015 I became the successor of Henk van der Zande as chairman of the Dutch class
organisation Twaalfvoetsjollenclub. Where we are now in the Netherlands with the 12" dinghy is the
result of Henk and his board and those who were before this time board members of this club. They
became successful because of their members. Great sailors. People with so much affection for sailing
a traditional wooden boat. People who are part as an individual or as member of a sailing family.
People with the same vision about their passion, sailing in wood, sailing in fair competition, getting
the best out of their sailing skills and strategic insight. But most of all people who find it important
that traditional and sustainable values keep solid.
It was in the annual meeting of 2013 that the annual member meeting voted for tradition. It was a
democratic decision and at this moment there are no signals that that vison had to be changed.
I’m part of that vision because of the way I voted in 2013 and because I think that the board off our
Twaalvoetsjollenclub has to function accordingly to the formulated vision in 2013.
The Royal Dutch Watersport Association is warning for dramatic loss of competitive and recreational
sailors. In their report from 2010 there was an expectation of 40 % lesser sailors in the sailing events.
Against that expectation is the 12 " dinghy still growing. In the 60's the 12" dinghy in the Netherlands
was in great problems and people suspected that the end was near. At this moment we are healthy
and growing. I have not found any argument of this development other than the image of the 12 "
dinghy and the consistent vision of keep the 12" dinghy traditional. It is very well suited for the
Dutch weather- and water conditions. And the sailors are also fond of the social aspects of this lovely
boat.
I did not yet have had discussions about this Dutch vision of 12" dinghy sailing with sailors from other
countries. I do know however that those sailors also have very valid reasons on which their vision of
sailing came alive. At this moment it is my personal opinion that structural up- or downgrading of
the dinghy’s in the different country’s is not realistic.
In the personal letter from Fabio Mangione he mentioned a phrase in which he said that the Dutch
dinghy sailors should respect the Italian way of dinghy sailing. Also asked Fabio Mangione if the
Italian dinghy sailors and the Dutch are still friends. In my opinion are these two elements of great
importance. What I have heard from Dutch dinghy sailors is that they have good memory’s and warm
feelings for sailing in Italy with Italian dinghy sailors. One of the problems however is the focus on the
different views of the development of the 12 " dinghy. Where the Dutch seek for tradition and
excelling in strategic sailing and boat handling to win a competition the Italians like the technical
component to the essential instruments in their dinghy. The technical component has the purpose
to make the dinghy faster. I feel upmost respect for that vision with the remark that in the
Netherlands we also have a vision. History in the Netherlands has shown transformation is often not
successful. It has destroyed some classes.
In reaction of the two questions mentioned by Fabio Mangione I would say. Yes there is friendship
between sailors in Italy and the Netherlands. And yes there is respect for the Italian vision to let grow
the dinghy. Those two components are the basics for a good future in our sport. I would like to end
with the Volvo Ocean Race. Knut Frostad decided in this race to stop the race in developing the
VOR70 . More and more budget was needed to compete and safety became a risk . At this moment
the race is on and the race is close. In an interview last year it was Bouwe Bekking from team Brunel
who said that he was happy because the race would be with complete similar boats focused on the
basic of real good sailing. But Bouwe is Dutch ........
For Fabio I wish him a successful time as president of the classic wood section of the AICD. I look
forward to compete with you on the water and speak joyfully about everything and specially how we
enjoy the sailing in a 12" dinghy.
Bert Bos 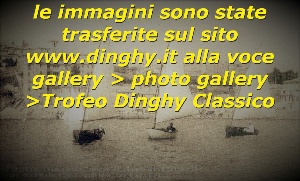